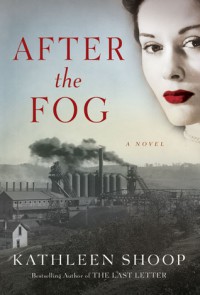 Kathleen Shoop hypnotises readers with her words bringing the story to life in such an encapturing way that it is so hard to put the book down.

In the mill town of Donora lives Rose and her dysfunctional family.  Rose is a nurse who strives to ensure that her community is looked after, nursing is her life but with the worry that their funding is running out hanging over her head. After growing up in an orphanage Rose is adamant that her children will have the best that live can give, that is her mission, her focus in life.  Although things don't go according to plan for Rose, her control to ensure they get away from Donora has become questioned and betrayed is how she now feels.  What her family are not aware of is why Rose is the way she is, the deep hidden secrets and hurt she hides away.

The background of the family structure and the plight of the mill workers and families make you feel that you have become absorbed into the era and the story. She brings the characters into the hearts and minds of the reader, the nice ones and even the not so nice ones,  Although I was caught out by the twist to the story.

People in Donora are proud of their industrial background, the mills are a way of life to them and they owe the mills for giving them jobs to be able to provide for their families.  Living in the constant noise, smell, hardship and worry that their loved ones might be injured or worse at work is just the norm to them, let alone the never ending fog that surrounds the village.

I know the book was based around the real tragic events for the local Donora residents but even so you would still have been easily taken in by the story.  The tragedy of the killing smog and the sad loss of lives and those who suffered illnesses was handled in a considerate way, it become clear that the author had put a lot of care and research into the story and I feel has done the Donora people proud.

Following on from such a traumatic event, is hard for everyone, especially Rose and my heart did go out to her.  There were a lot of similarities between myself and Rose, especially a current one with my son and his education which made me smile as I had the same realisation as Rose did in the end.

A nice ending to a realistic and gritty tale and I am one seriously hooked fan and that's just after reading two of her books, I cannot wait to read the next, in fact I need it right now!!