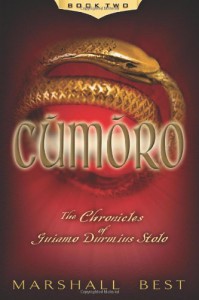 The second installment of The Chronicles of Guiamo Durmius Stolo.  At the end of the fist episode our hero has had some basic training but has become increasingly restless and in order to further his quest he signs up to join Caesars army.  His first task is to sail to Britain but on landing Caesars army is unsuccessful and has to abandon his invasion attempt leaving behind Guiamo.

The author takes us on a page turning adventure with excellent myths and legends thrown in.  The descriptions and situations are expertly described and you feel is if you are right there fighting and combating the evil spirits, carrying his secret weapons and whispering the spells in order from him to achieve greatness and triumph.

This story holds a lot of research and historical facts and the authors knowledge really shines through which holds and captivates the reader into imagining the creatures, people and the way they live and their will to survive.

The extraordinary element is having read the first installment I didn't think the follow up was going to be as enthralling or as good but how wrong was I.  I am certainly looking forward with great excitement to the third book.

If you love and I mean love a novel which can take you to a time you didn't live in and bring it to life then this story and the author is for you.

The writers style of writing is simple and with excellently references in the book to the ancient language used, the plot with mythical creatures with dark secrets will appeal to readers of all ages and especially to those of you who like to read a bedroom story to their children (but be warned you could be reading for a long time).