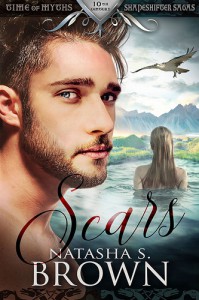 Along the breathtaking and unforgiving coast of Snæland, Ásta’s ancestral farm is plagued with bad luck. The kinless maiden’s turf walls continue to be found damaged, and there aren’t enough farmhands to maintain the property. Claw marks in the dirt revive old memories of the wolf attack that left her scarred, and she begins to fear the whispers are true—that Fenrir, son of Loki and king of the wolves, has come to claim her and her land.

Torin often leaves his uncle’s farm in the southern hills to track and ensnare valuable gyrfalcons. His secret ability to turn into the birds he trains means his falconry skills are unparalleled, earning him precious silver and gold. If the ghosts of his past didn’t haunt him daily, pushing him to numb his senses with drink, Torin might have married by now—as his uncle often reminds him. He knows the time has finally come to find a wife and settle down.

During the Althing, the gathering of the year, Ásta’s ability to maintain her property comes into question while Torin wonders if a woman in jeopardy of losing her farm is really worth the trouble.

Read more on the #book and author here....