The Dawn of Saudi: In Search for Freedom 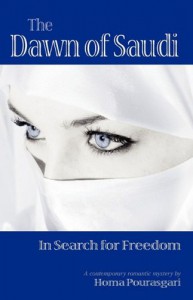 'Wow' is the best word I can use to describe this book. The story itself is a fantastic read with a major, unexpected, twist that blew me away, the author also includes powerful differences between east and west cultures in the book. The story follows the Grand Daughter of a powerful businessman, Sahar, who with her friend Dawn, schooled in Vancover and Barcelona, adopting some of the ways of the western culture while they were there. Unfortunately for them in Saudi Arabia these ways are totally unacceptable and they must adhere to the rules. For Sahar this means a forced marriage to a man 46 years her senior, even though it breaks her parents hearts they must follow their culture but more importantly follow the Grand Fathers demands as he is relying on this marriage to aide his failing business by both families merging their businesses after the marriage. Her parents also knew that if Sahar did not marry a Saudi man without the kings permission, which is extremely unlikely, she would be condemned to death by her family and courts, even if she moved outside the country she would be hunted down. Sahar could not bear the thought of being this man's property so he could do as he wanted with her, whether that included abuse, rape or torture. The culture means that Sahar would has basically no rights as a woman for help, she couldn't bear it any longer and decided to kill herself on her wedding night. Her friend Dawn was lucky enough to fall in love with a Saudi man who treated her like a princess and promised her that they would not live in this extreme culture and would live in the westerners compound where life was more relaxed. After changing her religion to Muslim they married but he had lied to her, he had two other wives and she was forced to live in the normal ways of Saudi culture. Soon after his business started to go downhill and starting taking it out on Dawn, she applied many times for divorce but as a woman she had no right to complain. One night he started to hit out yet again and she could not take anymore and killed him. Dawn fled with help and became a servant for the Crawford household who owned a multi billion dollar business, this was run by the romeo son, Jason, due to his fathers ill health. Jason's love for Dawn starts to grow immediately and this begins a complicated and unapproved romance between the employers son and a servant. Will their love survive?? As westerners we take our freedom for granted, going out when we want and who we want to go out with, having rights as women, being treated fairly. Reading the shocking and sometimes heart wrenching insight into another culture just made me realise how lucky we are. The story itself was beautifully written and I was totally engrossed in the book, especially the romance and mystery between Jason and Dawn, literally urging them on to be together. Once I started to read the book I found it very hard to put down and cannot praise it enough. Highly recommended.
Literature & Fiction Mystery
Tweet