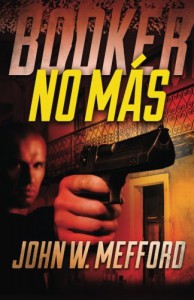 BRAND NEW THRILLER RELEASE
' is known for his fast paced, dangerous thrillers, the Booker series will not disappoint.  An emotional rollercoaster with heart pounding suspense and a warm feeling of friendship and family' reviews Laura's Interests.......
OK, I know less Spanish than Booker which made it just as challenging to understand the situations he finds himself in during this present dangerous assignment. That added to the elements of suspense and danger.
Adrenaline filled! (Spanish comments are translated for both Booker and the reader.)
While this book works well as a stand alone, I recommend reading the entire series. In this novel Booker is in search of a former lover, who happens to be a psychopathic killer. He met her in book one at the destruction of her wedding with her wealthy fiance hanging off the side of a famous church tower.
(Doesn't that pique your interest?
What or who Booker finds this time will surprise you.
John W Medford is known for his fast paced, dangerous thrillers.
The Booker series will not disappoint. It is not my usual genre but I am hooked, devouring his novels like chocolate.
In earlier books we see not only Booker's professional prowess but also his personal, human side with his friends and his tender love for his six year old daughter. Being out of the U.S. that is not possible, yet Mefford manages to round out his character again. I love the street smart, manipulative, older than his years Bolt. I am not sure who does the better job of protecting the other this time.
I am not blind to the book's faults. Esteban's heroic actions at the end were weak and somewhat disappointing. Where did he come from?
Did El Jefe play a larger role in his kidnapping?
The action scene was amazing but the details left me with questions.
Parts of the dialogue I enjoyed were the references to well known tv shows and movies:
"I was half expecting to see a 1969 orange Dodge Charger fishtail into the alley..."
"I hate snakes..."
"...if all of this wasn't the greatest ruse since The Sting..."
Medford has a wonderful way with descriptive dialogue.
Former cop Valdez makes a wise connection:
In the future, if you're around I will always need my sidearm.
Booker watching Sean check his cell phone early in their acquaintance:
Got somewhere to be? A camel to hunt down, a country to save?
"Dissolving the chip on my shoulder had helped me open my eyes and my heart."
Do not hesitate to take on this series. You will be glad you do.
It is an emotional rollercoaster with heart pounding suspense and a warm feeling of friendship and family.
Read all about the new #book and series here....
http://dogsmomvisits.blogspot.co.uk/2015/09/booker-no-mas-review.html
Source: http://dogsmomvisits.blogspot.co.uk/2015/09/booker-no-mas-review.html