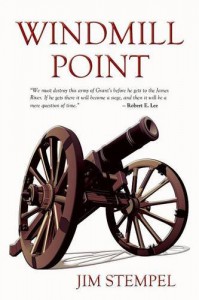 Book Review - Windmill Point by Jim Stempel 'an epic journey through a war torn period in American History' reviews hubbie....
"Enjoy a time travelling novel where the author takes you back to one of the decisive battles of the American Civil War. The research and knowledge of the period is excellent. All through the book you can smell the fear, the blood and the overall bravery of the soldiers on both sides to give up their lives for what they believed in. Using his intense knowledge of the general battle plans he brings them all to life and portrays their thoughts and lifestyles with excellent descriptive writing.
The author takes us on an epic journey through a war torn period in American History. The characters and scenarios are true to life and depict very deep emotions and the sense of loss of human life is felt very strongly. Sometimes it is hard to get into a historic novel and believe in the characters but this author has not failed. You can tell he cares and has put a lot of time and effort in creating them and has studied the period intensely to produce a novel which will interest historians world wide."
Read more on the #book and author here...
http://beckvalleybooks.blogspot.co.uk/2016/10/book-review-windmill-point-by-jim.html
Book Description
Windmill Point is gripping historical fiction that vividly brings to life two desperate weeks during the spring of 1864, when the resolution of the American Civil War was balanced on a razor’s edge. At the time, both North and South had legitimate reasons to conclude they were very near victory. Ulysses S. Grant firmly believed that Lee’s Army of Northern Virginia was only one great assault away from implosion; Lee knew that the political will in the North to prosecute the war was on the verge of collapse.
Jim Stempel masterfully sets the stage for one of the most horrific battles of the Civil War, contrasting the conversations of decision-making generals with chilling accounts of how ordinary soldiers of both armies fared in the mud, the thunder and the bloody fighting on the battlefield.
“We must destroy this army of Grant’s before he gets to the James River. If he gets there it will become a siege, and then it will be a mere question of time.” General Lee.
Jim Stempel’s Windmill Point captures the dreadful fury and desperate humanity of the American Civil War with a power and immediacy few authors have been able to achieve. I recommend it highly for anyone interested in a vivid portrayal of that violent crucible from which our modern society ultimately emerged.
Mark Robert Waldman, Executive MBA Faculty, Loyola Marymount University and author of Words Can Change Your Brain
Source: http://beckvalleybooks.blogspot.co.uk/2016/10/book-review-windmill-point-by-jim.html