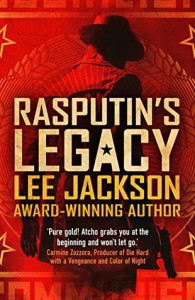 █▀▀▀▀▀▀▀▀▀▀▀▀▀▀▀▀▀▀▀▀▀▀▀▀▀​▀▀▌
★Rasputin's Legacy by Author Lee Jackson★
█▄▄▄▄▄▄▄▄▄▄▄▄▄▄▄▄▄▄▄▄▄▄▄▄▄​▄▄▌
"Pure Gold!" CarmineZozzora, Producer of Die Hard with a Vengeance and Color of Night.
His Code Name Is Atcho, a Cuban-born West Point graduate. He is the only covert operative on earth to be trusted by both the President of the United States and the Premier of the Soviet Union. A chance meeting of Rasputin, a mysterious monk with the daughters of the last Czar deep in the forests of Russia sets in motion cataclysmic events that surface 70 years later. Atcho finds himself battling a mysterious religious sect, the KGB, the Soviet military, and the Communist Party to save the National Power that had kept him imprisoned for more than 19 years – and he must do it without help or assistance from US intelligence resources. Failure would result in placing the full nuclear capabilities and military might of the Soviet Union into the hands of a madman bent on world domination.
Read more on the #book, series and author here...
https://beckvalleybooks.blogspot.co.uk/2017/12/rasputins-legacy-by-lee-jackson-cold.html
"Wow!. A must read." Joe Galloway, NYT Bestselling Author of We Were Soldiers Once...and Young (adapted to a Mel Gibson movie) and We Are Soldiers Still.
"Riveting! Thrilling ..." Kris"Tanto" Paronto, Hero of Benghazi, Bestselling Author of The Ranger Way.
"With this page-turning thriller, Lee connects the brooding mystic Rasputinto the Cold War, traces his dark influence into the present, and makesit relevant to today's churning world events. Stunning!" Bill Thompson, Editor of Stephen King's Carrie and John Grisham's The Firm.
"Clearly one of the best books of historical fiction I have ever read. Extremely entertaining and educational at the same time." Lieutenant-General RickLynch (Retired), former Commanding General, 3rd Infantry Division during the Surge in Iraq.