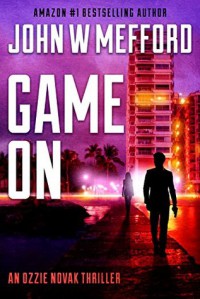 'Will Ozzie be able to save the daughter he never knew existed? This one will have you biting your nails waiting to find out.' reviews Miki's Hope​

'Ozzie will travel where ever he needs to in order to save his daughter. Plenty of twists and action going on. Pretty much an edge of your seats story. Another great addition to Mefford's saga.' reviews Espacular Aiesa​

A callous prank or a deadly test of conviction?

Ozzie has known one life -- his adoptive life. Until he received the letter.

Could there be another family member out there?

Ten years have passed. Too much has changed.

It's a twisted game of riddles. And a girl's life is on the line.

Ozzie can't deny the connection. But is it all just a cold-blooded trick?

Ozzie won't stop…can't stop until he finds her.

The yakuza have made their mark. But what other forces are in play?

For Ozzie, it's a test unlike any other. Pass, and he saves a life he never knew existed. Fail, and death will swallow her whole.

Will cruelty finally win out?

And can Ozzie risk everything to trust Alex Troutt to help?

Find out more on the book, series and author here....
https://beckvalleybooks.blogspot.co.uk/2017/12/game-on-ozzie-novak-thriller-book-2.html